What is the series about and where is it shown?

Created by the Duffer Brothers, Stranger Things is a sci-fi horror series set in the small town of Hawkins, Indiana, during the 1980s. Following a group of young friends, a number of mysterious events affecting the town appear to link up to a mysterious force in another world, the ‘Upside Down’, trying to find its way into ours. Perhaps the only hope of defeating it is a young girl, Eleven, with incredible telekinetic powers.

The first season launched on Netflix in July 2016 to critical and audience acclaim, with Season 2 arriving in time for Halloween 2017 and Season 3 dropping this year on July 4th. Following its protagonists from 1983 to 1985, the series is a love letter to 1980s cinema and pop-culture, with various allusions to the works of Stephen King, John Carpenter, James Cameron, Steven Spielberg and more.

What are the classification issues in the series?

As with its sci-fi and horror influences, the predominant classification issues in Stranger Things are sequences of threat and violence. These largely derive from the supernatural elements of the show, in which vicious monsters pursue characters in this world and also in the ‘Upside Down’, although early in the series these attacks would often occur off screen. As the series has progressed. As the series has progressed and its protagonists have matured, however, so too has the intensity and graphic nature of the series’ content.

The classifications of individual episodes across the three seasons reflect this – tending to rise over the show's three seasons. The defining issue of Season 1 was strong threat, along with occasional scenes of strong violence. We rated five of the eight episodes 12, and three of them 15. The former contained scenes of sci-fi threat and horror that were on a par with the similarly nostalgic family adventure Super 8, which had been classified 12, but other episodes contained sustained sequences and additional detail that took them to 15. In Season 2, we only classified three episodes 12, with the other six episodes rated 15. Scenes of strong threat were again the defining classification issue, although one episode also contained strong violence and injury detail.

In contrast, we have classified all eight episodes of Season 3 at 15, with strong violence now joining threat as the principal category-defining issue, along with strong bloody images in some episodes. The higher ratings tied to a key plot point in Season 3, in which the ‘Mind Flayer’, the malevolent being in the ‘Upside Down’, seeks to take a physical form in this world. It does this by infecting hosts, whose bodies then collapse into gory matter and reform into a large monster. The effects used to depict this creature evoke John Carpenter’s 1982 sci-fi horror The Thing, in which an alien creature takes the form of other beings. When discovered the alien must defend itself until it takes another form. Indeed, eagle-eyed viewers may have noticed a poster for The Thing decorating Mike’s basement in Stranger Things! Famed for its grisly practical effects, The Thing was originally rated X for theatrical release in 1982, and then 18 under the new rating system for its 1987 video release. The BBFC last viewed the film in 2009, when we recommended the film retain its original classification of 18 for ‘strong violence and gory horror’.

Unlike The Thing, the gory images in Stranger Things are rarely the result of violence directed at another person, such as gory dismemberment or sadistic violence. When the bodies implode to form the monster, the detail is relatively brief and clearly fantastical, and doesn’t dwell on the infliction of pain and injury in a manner that some 18-rated content does.

Another aspect we consider when viewing sequels or subsequent series in a franchise is the concept of a “known quantity” and audience expectations. While Season 3 of Stranger Things contains more body horror than previous seasons, the series has shown a steady progression in its depiction of violence and horror from season to season. It is a show watched primarily by audiences who have bought in to the style, genre and themes and followed it closely. The show’s primary focus remains on the characters and their relationships, with music and humour also serving to mitigate some of the overall impact of the threat and horror. Also, while there are consequences to the action in Season 3, the conclusion reinforces positive overarching themes of friendship and family (and might also leave viewers wanting to sing the theme from Neverending Story…)

How did the BBFC classify the episodes?

The BBFC classified all three seasons of Stranger Things as part of the BBFC's 'Watch & Rate' service for online only content. The BBFC has a statutory duty to classify video released on physical media such as DVD and Blu-ray in the UK. Though Video on Demand platforms do not need to submit their content for BBFC classification by law, many, including Netflix, do. The BBFC uses the same Classification Guidelines and age ratings (U, PG, 12, 15, 18) for Video On Demand content as it does for physical media.

In the case of Stranger Things Season 3, a Compliance Officer, viewed and produced individual reports and ratings info for each of the eight episodes. As some scenes contained sustained flashing and flickering lights, we sent a letter recommending a warning accompany the series along with the ratings info to alert viewers who may suffer from photosensitive epilepsy or other conditions. Viewers will see the BBFC ratings info and a flashing lights warning appearing on screen at the start of each episode viewed on Netflix.

What about the classification background of other films referenced in Stranger Things?

As with its predecessors, Season 3 of Stranger Things is full of references to classic sci-fi and horror films, including Invasion of the Body Snatchers, Day of the Dead, Jaws, and Back to the Future. The Terminator was similarly an influence on the character of Grigori, the (almost) unstoppable Russian soldier. James Cameron’s sci-fi thriller starring Arnold Schwarzenegger as the eponymous cyborg has an interesting classification history. The BBFC originally classified The Terminator 18 in 1984, but later reclassified the work 15 when it was re-submitted in 2000. This reflects the standards for scenes of violence under the then-current BBFC Guidelines and continues our dedication to keeping up-to-date with the views of the UK.

Fans will have noticed one of the stars of the 1985 family adventure film The Goonies, Sean Astin, had a prominent role in Season 2 of Stranger Things. The Goonies also has an interesting classification history. As there was no 12 category for cinema films in 1985 (the BBFC introduced 12 in 1989, and 12A in 2002), BBFC examiners had to decide whether to classify The Goonies PG or 15. A stark choice. After receiving cuts to a use of strong language (‘f**k’) and moderate sex, drug and suicide references, the film was classified PG. However, in 2004 the distributor submitted The Goonies for video release and the BBFC passed it 12 uncut. In April 2019, the distributor resubmitted the film for a 4K theatrical re-release in its uncut form, where it was rated 12A.

More information about the earlier series of Stranger Things can also be found in our BBFC Podcast.

More on this film

Explore our other resources about Stranger Things 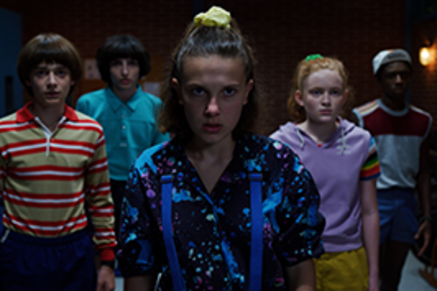 In this episode we discuss the classification of films that inspired the Netflix Original series Stranger Things, including E.T. The Extra Terrestrial; Stand by Me; and The Goonies.