Voluntary online regulation continued to grow in 2014, with the BBFC charting a 103% year-on-year increase in submissions of online content, reflecting the shift in the Home Entertainment market towards digital sales and Video-on-Demand services. The BBFC also continued its work to provide a regulatory framework for mobile network operators.

Further voluntary regulation of online content began in October, when the BBFC in partnership with the BPI, Vevo and You Tube, and UK record companies Sony Music UK, Universal Music UK and Warner Music UK, launched a pilot to classify online music videos by UK artists signed to the three major labels. The pilot brings the same content standards to online music videos as that envisaged by an amendment to the Video Recordings Act, in force from 1 October 2014, requiring the classification of previously exempt music videos, and other educational, sport or religious videos, on DVD and Blu-ray. Any video featuring content at the 12, 15 or 18 level must be submitted to the BBFC for classification.

BBFC Director David Cooke said: "As in 2013, the most fast-moving developments in our work have been in the non-statutory, self-regulatory area. Our work to protect children from potentially harmful media content online increased significantly and our partnership with the mobile industry to regulate, on a voluntary basis, internet and commercial content delivered via the mobile networks of EE, O2, Three and Vodafone also received praise from the Government, child protection groups and others, including the Open Rights Group. In 2014 we considered appeals in relation to 42 websites available via mobile networks, dealing with issues as diverse as assisted dying, racism, abortion, and hunting. Details of all of these cases are published on our website."

In addition to a growth in voluntary regulation, the BBFC classified more than 950 films for cinema release in 2014, making the level of theatrical submissions on a par with the 1960s.

In 2013 the BBFC Classification Guidelines review consulted more than 10,000 members of the British public about film classification and found that 75% understand that a film rated 12A is generally suitable for children aged 12 and over, but a younger child may see the film if accompanied by an adult. Because up to a quarter of those surveyed were unsure as to the meaning of the 12A rating, from July to September 2014 an advertisement to help increase awareness of what the 12A cinema rating means was broadcast in cinemas across the UK. The advertisement reminds parents to check the BBFCinsight for every 12A film before they take a child under 12 to see it.

As part of our wider education work, in 2014 the BBFC spoke to more than 12,000 teenagers, younger children and adults about its work to protect children and empower consumers. Many BBFC education sessions take place in partnership with film festivals, libraries and cinema chains. Our biggest collaboration of 2014 was with the Into Film Festival where we introduced 22 screenings at 17 cinema locations across the UK. 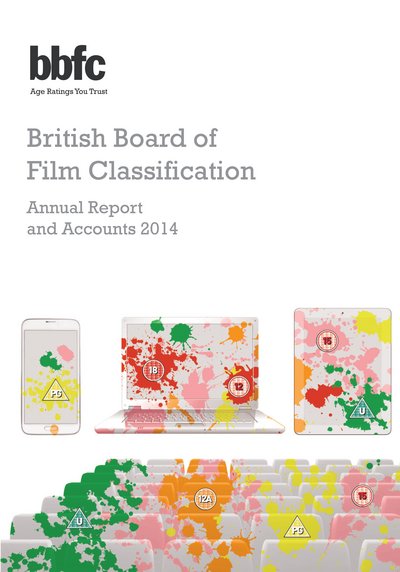 2014 saw a further shift in the balance of our statutory and nonstatutory work. Theatrical submissions continued at their highest level since the early 1960s.