Today, the British Board of Film Classification (BBFC) publishes new Classification Guidelines, and in response to public demand is calling for greater consistency for age ratings across different platforms.

The BBFC's public consultation - involving more than 10,000 people – showed that young people and parents want to see an increase in classification guidance, particularly around online content, as well as more consistency across all platforms.

David Austin, Chief Executive Officer at the BBFC, said: "Over the last five years the way we consume film and video has changed beyond all recognition. That's why it's so important that there is consistency between what people watch on and offline.  The research shows that parents and teenagers want us to give them the information and guidance that they need to view what's right for them."

The BBFC’s consultation confirms that people feel a heightened sense of anxiety when it comes to depictions of 'real world' scenarios, in which audiences – especially young people – are likely to be concerned that it could happen to them. For example, realistic contemporary scenarios showing terrorism, self-harm, suicide and discriminatory behaviour. This research confirms that the BBFC's current category standards are reflecting the public mood.

The large scale research also found that attitudes towards sexual threat and sexual violence have moved on since 2013/14.  Although the BBFC already classifies such content restrictively, people told us that certain depictions of rape in particular should receive a higher rating.  The BBFC has therefore adjusted its Classification Guidelines in these areas.

People also told us that they expect the strongest sex references, in particular those that use the language of pornography, to be classified at 18.  The new guidelines reflect this demand.

David Austin added: "We're here to listen to what people want, which is why they trust our age ratings.  So it's encouraging to know that we've been classifying content in line with what people want and expect when it comes to difficult themes around credible real life scenarios. We also know that people are more comfortable with issues such as action violence, if it's in a way that they are expecting – such as a Bond or Bourne film. We are updating our standards around depictions of sexual violence and very strong sex references to reflect changes in public attitudes."

The new guidelines will come into effect on 28 February 2019.

About the Classification Guidelines

The new Classification Guidelines are now available online and will come into force in 6 weeks time, on Thursday 28 February 2019.

About the public consultation

The consultation exercise, which began in January 2018, involved more than 10,000 members of the public from across the UK, including teenagers as well as their parents. The consultation process issued films and videos to households across the UK and asked for their views on the classification of this material. The research included 32 focus groups in England, Wales, Scotland and Northern Ireland looking at how the public thinks specific issues, such as racism and discrimination, difficult themes – including suicide, self-harm, abuse – sex and sex references, violence, threat and strong language in films and videos should be handled. Several thousand members of the public were asked about classification generally and about 60 specific films and videos, including some of the most controversial films of the past four years. 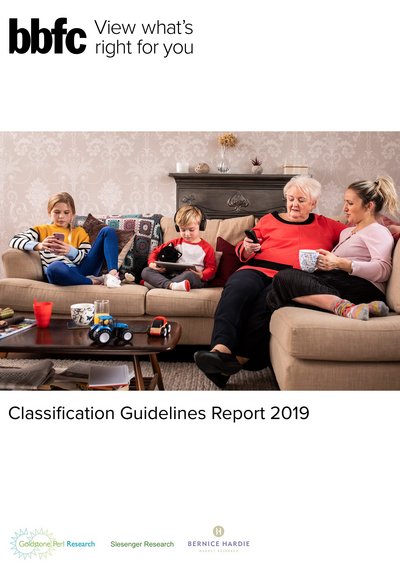 In an ever shifting media and social landscape, the two main tenets of the BBFC Guidelines still remain; to protect children and vulnerable adults from harm and to empower consumers to make informed viewing decisions.