In 2016 the BBFC age rated 1,075 films for cinema release, the most since 1957, proving that Britain continues to be a nation of film enthusiasts. In a year where almost twice as many films were released in cinemas compared to 2009, more films were rated 15 (401) than any other age rating. Every film age rated by the BBFC comes with detailed BBFCinsight information to help people make informed viewing choices for themselves and their family.

Away from the cinema the popularity of digital content continued to rise. In line with this, the BBFC charted an 85% increase in the number of minutes of digital content submitted to it compared to 2015, with Netflix sending more titles to the BBFC than any other customer. In 2016 the BBFC also age rated a virtual reality (VR) film for the first time as ABE VR, a short horror VR film, was rated 15 for bloody violence and threat.

David Austin, BBFC Chief Executive, said: "The BBFC’s key aim is to help families make viewing decisions that work for them at the cinema and at home, where an increasing amount of content is available online, as well as on DVD and Blu-ray. We were also named by Government as, subject to designation, the preferred regulator for the age verification of pornographic content online under the Digital Economy Act, a further endorsement of our expertise as a regulator that has the ability to help protect children from unsuitable content online. The BBFC will continue to adapt to innovations in technology and shape its Classification Guidelines in line with the attitudes of people living across the UK, including parents with young children, regular film viewers and teenagers."

In addition to providing the latest age rating information on its website and free app, the BBFC continues to publish resources for students, including a regular podcast. In 2016 the BBFC's education team also held 151 teaching sessions for over 9,000 people, talking to them about the history of the BBFC, what the age ratings mean, and how they can check what the key issues are in a film, DVD/Blu-ray or VOD release, before they watch it. 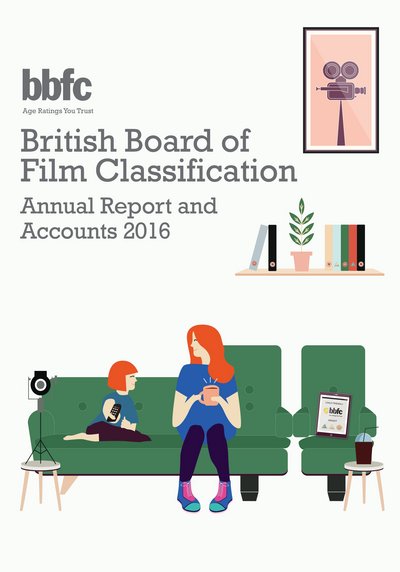 In his report, our new Chief Executive, David Austin, discusses the importance of the BBFC providing a trusted guide to families in the online space.