Following new research, after working with Women’s Aid and Respect, the BBFC is changing the way domestic abuse is labelled in its ratings info for films and episodic content.

The British Board of Film Classification (BBFC) is changing the way it highlights domestic abuse in ratings info for films and episodic content, after working with Women’s Aid and Respect on new research.

The research - which focused on both female and male survivors of domestic abuse, experts and the general public - showed that the BBFC is getting it right when it comes to classification decisions in both films and episodic content featuring domestic abuse. The regulator already takes domestic abuse portrayals seriously, and the respondents agreed that the BBFC rightly classifies these issues at a higher category.

The research showed that ‘less is more’, and going into too much detail in the ratings info is a minefield as people’s sensitivities and triggers are complex - this is already taken into account in the classification decision. It was highlighted that the widely understood catch-all term of ‘domestic abuse’ was much better placed to describe such scenes, as it is considered broad enough to include psychological and economic abuse, gaslighting and non sexual abuse of children.

Therefore, the BBFC will now use ‘domestic abuse’ instead of ‘domestic violence’ in the ratings info it issues to accompany its ratings. The BBFC will also stop using the term ‘themes of’, which the research showed people felt trivialised the issue.

The research flagged that survivors can be triggered by scenes of domestic abuse, especially if it is unexpected. This can be traumatising, and can lead to people avoiding certain types of content. Responding to these findings, the BBFC will now flag domestic abuse in every case, even if the scenes are not category defining.

David Austin, Chief Executive of the BBFC, said: “This timely and important research is shining a light on people’s attitudes towards domestic abuse, and it’s important that our classifications reflect what people think. It’s very encouraging to see that we’re getting our classification decisions right when it comes to domestic abuse, which already can be category defining. But what it has shown, is that we should bring our ratings info more in line with what people expect and understand, which is exactly what we’re going to be doing. These changes will give people the information they need to choose content well. Most particularly in this case, the ratings info will highlight the issues to those that have been personally affected by domestic abuse, so they are forewarned of content which could trigger distress.”

While there were few factors that would reduce the impact of watching a scene of domestic abuse, a series of aggravating factors among survivors were flagged, including: the sound of a key turning in a lock; the silence before an attack; the sound of a slap or a punch; and seeing fear in someone’s face or eyes.

Adina Claire, Acting co-Chief Executive of Women’s Aid, said: “This research has given an important insight into what survivors, experts and the general public think about depictions of domestic abuse in films and episodic content. We’re pleased that the BBFC have responded to the report, and have reflected the attitudes in their classification policies - meaning that anyone affected by domestic abuse will now have the clear and consistent information they need about what triggers content may contain.”

People agreed it's very important to educate audiences about the issue and to encourage awareness and discussion. As such, the research strongly underpins the BBFC’s policy of being less restrictive on public information campaigns than on commercial trailers and ads, rating them at the lowest reasonable classification. 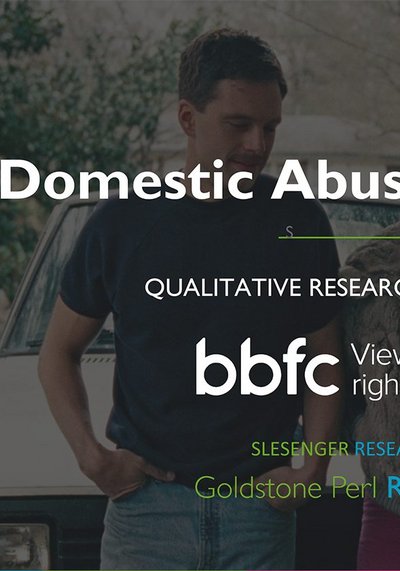 Research was required to provide insight to support future classification of domestic abuse in film, TV shows and advertising.