The BBFC’s voluntary regulation services grew significantly in 2013. In September the BBFC became the regulator of internet content delivered via mobile networks. Meanwhile, content classified for video-on-demand under the BBFC’s Watch & Rate service increased by 200% in 2013, with 34 new companies submitting content for classification. BBFC ratings can be found on iTunes, BT Vision, Talk Talk, BlinkBox, FilmFlex, Sainsbury’s, PlayStation and XBox. They are available for customers building Ultraviolet collections and can be seen on the seatback entertainment systems on Virgin and British Airways flights.

Education for younger children was an area where the BBFC expanded on its existing outreach programme by launching a new website for children and their parents, www.cbbfc.co.uk, in September. The website features child friendly interactive content, including classification information for the latest film releases rated U to12A; timelines explaining the history of film classification; the popular rate a trailer activity; and a page dedicated to understanding 12A. The website launched with a competition for children, which challenged them to draw pictures representing the correct audiences for each age rating. The winning illustrations, selected from over 130 entries, feature on a poster resource and leaflet which is available as a free resource for schools.

BBFC Director David Cooke said: “2013 was a year of key firsts for the BBFC. We began working to provide a classification framework for mobile operators, trailblazing new ways in which the BBFC’s research and expertise in content classification can be applied. We also spoke to teenagers for the first time as part of our Guidelines Consultation exercise, finding that 76% consider classification to be important. Meanwhile our new website for younger children aims to ensure they too learn how to navigate age ratings and, alongside their parents, make informed choices about what they watch at the cinema, on DVD and on VoD platforms.”

Mobile Operators in the UK began to use the Mobile Classification Framework designed by the BBFC to filter video and website content available via mobile networks on 2 September 2013. The framework is used to filter internet content available via mobile networks and is a key component of the Mobile Operators’ code of practice, established in 2004, and was previously devised by the Independent Mobile Classification Board (IMCB).

Another area of growth for the BBFC involved international partnerships. Working with the Dutch media regulator, NICAM, the BBFC designed a user generated content rating tool that can be used to provide ratings for content uploaded to video sharing websites. The tool allows viewers to rate content themselves with the ratings adapted to suit the requirements and expectations of the country in which they are viewing the video. The tool is currently being trialed by the Italian media company Mediaset on their video sharing platform 16mm. 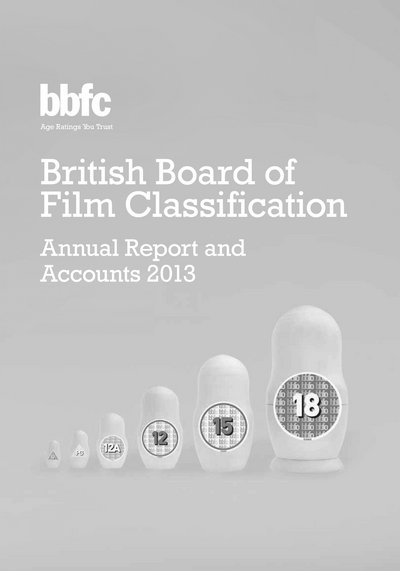 This annual report reflects the work undertaken by the BBFC in my first full year as President. I have been particularly struck by the level of public trust in the organisation.