BBFC mark their centenary year and continue to work with the home entertainment industry and Government to protect children from unsuitable content.

In its centenary year the BBFC worked to achieve greater protection for children from harmful content both online and in videos exempt from classification under the Video Recordings Act.

In 2012 the BBFC responded to a DCMS consultation on exempt video.  The BBFC, British Video Association, British Phonographic Industry, the Video Standards Council and the Entertainment Retailers Association all supported a technical adjustment to the Video Recordings Act whereby content in exempt videos which is potentially harmful to children should lose the video its exemption. In May 2013 the Government announced that a change would be made to the Video Recordings Act to ensure that content which is potentially harmful to children will in future be scrutinised by the BBFC to keep it from impressionable and vulnerable children.

Online was an area where the BBFC saw the greatest changes in 2012.  The number of online only classifications rose by 40%.  The number of companies using the BBFC’s Watch & Rate service for online only content more than doubled, with 11 new platforms licensed to use BBFC ratings online, including Netflix, Sony PlayStation, Microsoft Xbox and Sainsbury’s, BA and Virgin Atlantic.

On the back of a number of films submitted to the BBFC in 2011 which contained extreme violence, generally against women, we carried out a major piece of research into depictions of sexual and sadistic violence in film in 2012. The BBFC has consistently maintained a strict policy in relation to classifying depictions of such violence and will continue to intervene in relation to any depiction of sexual or sadistic violence which is likely to pose a non trivial harm risk through, for example: making sexual or sadistic violence look appealing; reinforcing the suggestion that victims enjoy rape; or inviting viewer complicity in rape or other harmful violent activities.

BBFC Director David Cooke said: “In 2012 the BBFC worked with both Government and the home entertainment industry to maximise the impact of our expertise in tracking public opinion and protecting children from potentially harmful content through both digital age ratings and informing the DCMS consultation on exempt videos.

At the adult 18 level we took extra steps to ensure our policy on depictions of sexual and sadistic violence are in line with public opinion. Research carried out in 2012 reaffirmed views that adults should be able to choose what they see, but highlighted a public concern about certain depictions of sexual and sadistic violence. This concern was particularly acute in relation to young men without much life experience, and other vulnerable viewers, accessing sadistic and sexually violent content, which could serve to normalise rape and other forms of violence, and offer a distorted view of women. The decision as to whether and how to intervene in scenes of sexual and sadistic violence is complex, but by carrying out detailed research and highlighting aggravating and mitigating factors, the BBFC is better equipped to arrive at a decision which balances freedom of expression against public protection”.

2012 was also a historic year for the BBFC as the organisation reached its 100th year. A series of ‘retro’ BBFC black cards were designed and shown before all new UK cinema releases, and a season of controversial films, panel events and an exhibition was held at BFI Southbank, London. The BFI published a book, Behind the Scenes at the BBFC: Film Classification from the Silver Screen to the Digital Age, with contributions from, leading film critics, historians, cultural commentators and even BBFC staff. There were further collaborations to mark the BBFC’s Centenary, including an exhibition in partnership with University of Westminster, celebrating 100 years of British Cinematic history, and events at the Hippodrome in Falkirk and Soundtrack Festival in Cardiff.

BBFC Director David Cooke said: “In 2012 we looked back at our first 100 years, often in partnership with numerous organisations and individuals, all of whom added richness and expertise to our celebrations. But in examining the past, we also looked towards the future, where the BBFC will continue working with current and new partners to classify and label online content, better protect children and empower consumers.”

The information the BBFC provides for the public was refreshed during 2012 through the creation of a new website bring together the main BBFC website, the BBFC website for parents (PBBFC) and the BBFC education website for students (SBBFC). The new BBFC website allows users to watch trailers for new films classified U-15 and sign up to receive regular BBFC newsletters.

There was also a revision of BBFC Consumer Advice and Extended Consumer Information (ECI) to create BBFCinsight. BBFCinsight captures both Consumer Advice and ECI, bringing both of them under a more memorable name. BBFCinsight includes both a summary sentence (like Consumer Advice) and a longer explanation about why the film received the classification it did. It also provides other details parents have told us they like to be aware of, such as examples of mild bad language, or themes such as divorce or bereavement that might not impact on the age rating but which might upset some children. Parents can find a short summary of BBFCinsight on DVD boxes and cinema posters and more detailed BBFCinsight on the website and the BBFC iPhone and Android Apps. BBFCinsight is available for every film and video game classified by the BBFC since Autumn 2007. 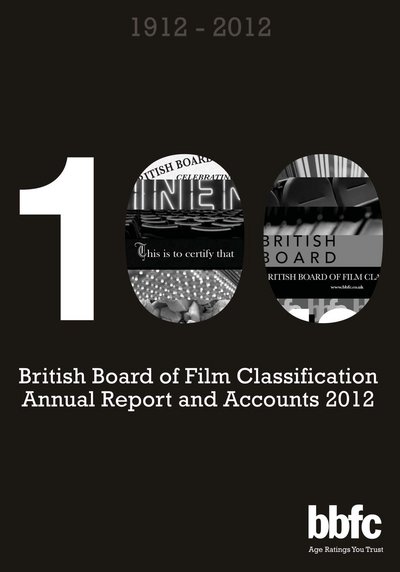